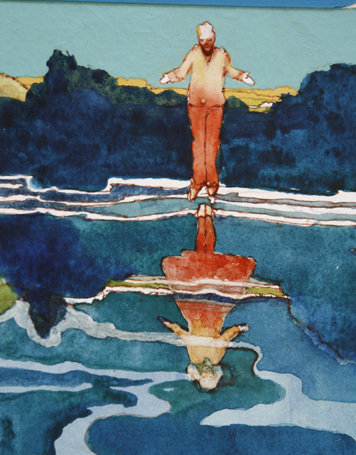 Bloodsucking bullies tormented me in my youth. Mindful of their attacks, terrible anxiety, fear, and anger compounded my stuttering. Hating myself for my failure to speak normally, I desperately wanted the predators who preyed upon my weaknesses to stop.

During my Catholic grammar school education, I learned that Jesus “turned the other cheek” and prayed for his tormentors because “they did not know what they were doing.” But after years of prayer for my stuttering to stop and my adversaries to become more enlightened, I finally gave up after a particularly devastating attack.

When my “turning the other cheek” strategy had worn thin after three years of bending over backwards in front of my adversaries, I went to my dad for help. Taking me outside, he showed me how to punch when I was eight years old. I learned how to use my legs as a powerbase and use my whole body to deliver the overhand punch that any good boxer worth his salt would deliver. We  practiced together until I was ready to shut up any jerk that gave me lip.

Sure enough, when the first bully started up with the abuse, I punched him in the face without blinking an eye. He shut up right quick, and I started looking around for anyone else cruising for a bruising. While I was riding high on my initial rush of satisfaction for standing up for myself like a man should, another kid came by and made the mistake of ridiculing me. He got the medicine he deserved.

But then my world came crashing down around me like a ton of bricks. The new bully had pointy shoes and kicked me in my private parts like a kangaroo. Collapsing to the ground in a heap of agony, all I could do was tear up and try to catch my breath. I felt stupid curled up like an armadillo on the ground at the feet of my perpetrator, before a nun mercifully took me into her classroom to recover. Since my “turning the other cheek” plan hadn’t worked out and my father’s strategy to stop bullies had a major pitfall, I needed a new solution.

A month later four boys started to make fun of me as I approached the school entrance. I spontaneously decided that I wasn’t going to give them the pleasure of seeing me scared, mad or fearful of them. I calmly walked up to them, looked them in the eye and shrugged my shoulders before I said, “You’re right, I have a stuttering problem.” The original perpetrator tried to get a rise out of me again and one of his friends stopped him by telling him to lay off.

That was the last day I had trouble with bullies. Happy and unaware of what just happened, I had stumbled upon a universal truth about bullies. They feed off the emotional reactions of their victims like bloodsucking vampires. It was clear to me that bullies get an emotional release from their dissociated fear and rage and experienced relief when witnessing someone else’s pain. My pain had a destiny.

This victim/perpetrator paradigm is a prolific, insidious problem and has been throughout the human history. Every cycle of abuse and victimhood has this pattern of perpetrators needing victims and vice-versa, to experience and express the emotions they dissociate. The universe is interested in helping both parties heal the issues, which is why we are attracted to one another. When a victim remains calm during an attack, a perpetrator gets bored quickly and moves on by discharging his or her dissociated pain, anger and rage onto someone else.

These principles within these steps really work. Follow each step and the bloodsucking vampire won’t have a comeback. When the targeted individual can remain emotionally neutral and look the vampire in the eye in complete acceptance and ownership of the problem, the perpetrators consistently stop, get bored, and move on to a more satisfying victim. I would have never guessed that the ideas just mentioned would stop a bully when I was curled up on the ground at the feet of my perpetrator at the tender age of eight.

Cherishing ourselves and accepting flaws is hard to do. Self-criticism is a misguided attempt to become “worthy” of love. But our heart and soul will hear nothing of it while our ears sting. The universe provides mirrors so we can see our reflection. When we judge and hate ourselves, we attract bullies and emotional vampires looking for the same blood that self-recrimination causes. Accept your flaws and learn from them. Pain has a destiny that can teach us about equanimity.