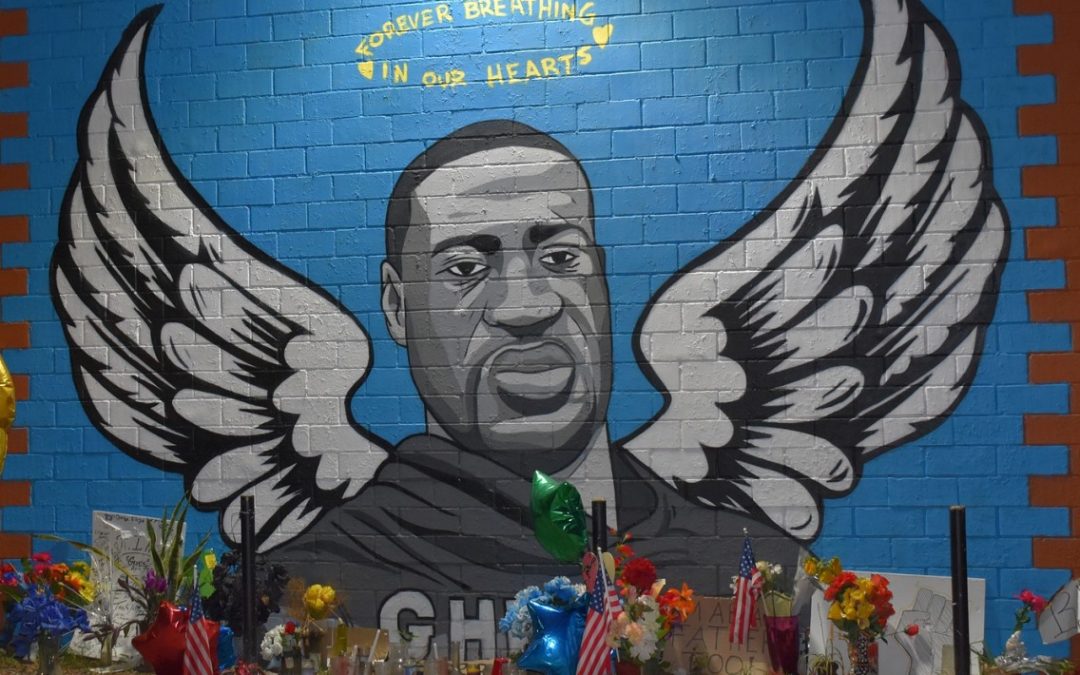 America is changing and this mural, which was painted in Washington DC on June fifth, 2020 proclaims Black Lives Matter on the street that leads to the White House. Typically, the recent tragic deaths of George Floyd and Ahmaud Arbery would have been mentioned in the news then ignored by mainstream America in the past. However, due to graphic murder videos, which clearly documented white men calmly killing people of color, touched a nerve as profound as this devastating pandemic. These videos documented police brutality and a white supremacist hate crime, that shocked even white America’s sensibilities. Protests quickly erupted around the world to denounce police brutality and systemic injustices to minorities. 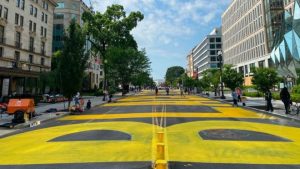 Protesting in the streets to spotlight racial suffering and injustice is not a new phenomenon. However, Muriel Browser the mayor of DC, who commissioned the mural pictured above, deserves a compliment on her brilliant, creativity. Looking back for precedents after mammoth changes swept our nation, Let’s go back to The Great Depression era protests to get a prospective on how peace was created previously. when America struggled with crisis after crisis of epic proportions a hundred years ago for historical lessons.

During the Great Depression unemployment hit major cities and people of color were extraordinarily hit hard. For example, the Union Square Riot in New York City in 1930 had thirty-five thousand strong. They were protesting the huge wealth disparity created by monopolies between the 1% and the 99 percent of the population much like the Occupy Wall Street movement that challenged corporate greed and lack of oversight that lead to our previous worldwide recession in 2008. The only difference from then until now was complacency…huge wealth and racial disparity didn’t capture America’s full attention as it did in 1930. 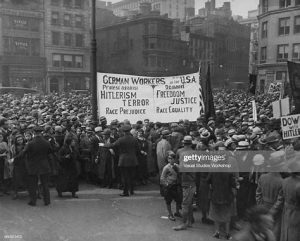 Elected in 1928, President Hoover took mild steps to address the stock market crash in 1929. Conservatives, at that time and even today, think government should not interfere with the marketplace. During the crisis, Hoover chose to tax the wealthiest Americans at 25%, hoping they would create more jobs then turn the economy around. Unfortunately, this did not happen and everything got worse. In quick order, trust in our fundamental institutions like banks and government declined. President Roosevelt (FDR) was elected in 1932 during a time where unemployment rates persisted around 20%. He taxed the wealthiest Americans at 94% and also increased the national debt, which funded the war effort and FDR’s New Deal programs. Bank regulations, unions, public work projects, unemployment insurance and Social Security were created to support the average American. Peace returned to America, when the average family thrived again.

Historians debate to this day, which of his programs worked the best, but most agree government oversight, the galvanizing effect of WWII and the public spending programs within the New Deal and was crucial. Since World War II until now, bank regulations have eroded, unions are disappearing and infrastructure spending wanting. In the past two years, corporate taxes have been lowered and the wealthiest Americans are now taxed at 37%.

To gain a historical perspective until now, our Gross National Product (GNP) to Debt ratio from 1932 to 1940 rose five percent from 33 to 38%. In 2008 our GNP to Debt ratio was 68% and in the past twelve years it has risen to 110% today. The GNP to Debt estimate for 2021 is 136%. Today, unemployment concerns, economic turmoil and Black Lives Matter protests are at the forefront of everyone’s mind due the complicating factors caused by this pandemic, racial inequality and the global economic downturn. In the past three months, America has similar unemployment figures as during The Great Depression. So, what can we learn from FDR’s famous quote, “The only thing we have to fear is fear itself.”  And how can we find hope or peace?

Former President Barrack Obama, who wrote a book called The Audacity of Hope, gave a talk this past week comparing the racial protests from the 1960’s and today. He noted a stark difference in the Black Lives Matter protests. Eighty years ago, white America rarely marched or supported racial equality in significant numbers.  Now we have a sixty/forty percent split between people of color and white protestors. Citing a Monmouth University Poll conducted on June 2, 2020, he said now 57% of Americans think the Black Life Matters protestors are justified and 74% of those polled think our country is heading in the wrong direction. These numbers are unprecedented and represent a 24 % increase from historical figures. There is staggering change of heart happening on our streets and many other countries around the world. For example, the following picture is from Australia, where ten thousand protestors recently demanded equal treatment for minorities this week in Sidney. 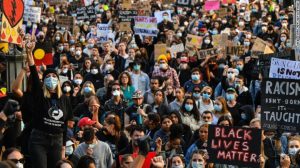 In 1964, during anti-war and racial protests Bob Dylan wrote his famous song, The Times They Are A-Changing. The Vietnam War eventually ended nine years later. World War II and the Great Depression also changed the world, but racial discrimination has persisted since slavery was invented. There seems something is different now and indeed, suffering creates rapid change. Due to a seventeen year old’s eight minute and forty-six second cell phone video and social media, the world had a front row seat to watch the George Floyd’s murder. Ahmaud Arbery’s murder video was shot by white supremacist documenting the hunt. Social justice, racial equality, responsible governance, economic recovery and pandemic relief will take time, but hopefully not centuries like we have seen.

The rest of this article will explore how individual peace is created before peace blossoms worldwide.

Peace is an interesting word all by itself because the word itself has a relaxing harmonic. Before the pandemic and Black Lives Matter protests, most of us worried about mundane topics. We worried about our appearance and what others thought of us. What color of car should I buy? Etc. Etc. People put a lot of psychic energy into ego driven adventures that drain the patience of our soul. Our personality has habits and routines it plays out religiously, souls have agendas also. Discerning what is actually important in life is challenging. The personality’s plan is to survive, get food and water, procreate, raise a family or just have fun. Our body and mind serve the personality’s need to survive. Our personality experiences peace when it accomplishes goals and satisfies a need. The body experiences peace, when its physical requirements such food, water, shelter and sexual release needs are met. So, how does our soul achieve peace?

Every soul incarnates to learn, to expand its’ consciousness and to further divinity’s plan to explore multiple versions of love in every form. By mirroring, expressing and manifesting to the outside world all of our conscious and unconscious beliefs, we grow spiritually. This is accomplished through our interactions with others and generally by everything we do. In order to expand our understanding of love as an individual, our soul had to separate from source, incarnate on earth and achieve peace by returning home again. Leaving divinity was and will always be the most difficult spiritual challenge for each soul. The initial traces of the pain, isolation and sense of loss, when we left the oneness are encoded deeply in the psychic recesses of our body, mind and soul.

This is why abandonment is so agonizing and the most painful experience humans can endure. This is why countless songs and protests we see today are dedicated to broken hearts. Abandonment is not only devastating to a lover, but it also literally means leaving one’s soul behind in a spiritual sense. When people abandon others or themselves, everyone suffers greatly. This sense of abandonment fuels the current Me Too Movement and Black Lives Matter protests. Injustice, inequity and intolerance for another human’s suffering activates core abandonment issues.

Some religious teachings also promote abandonment. Hell is a religious concept and originated from the imagined idea of God’s absence. The most painful illusions humans endure stem from the isolation experienced, when they feel abandoned by their creator. Unfortunately, many religions have preached and/or promoted this illusion about a God, who abandons. Regrettably, they set the stage for the most horrific atrocities man has perpetrated onto humanity. When people are told and believe the divine abandons, they frequently forget the unity of life and the oneness of all creation. If their God can do it, so can they. Sold on the concept of we versus they, humanity can loose it’s connection to the loving interaction and gentle guidance of their heart that relates to the suffering of others.

Enlightened individuals know All Men Are Created Equal and Black Lives Matter. When people lose their loving heart connection to everyone and everything in nature after being abandoned, the checks and balances built into principles and values designed to stop the carnage are lost as well. The pattern just described is the mechanism that has fueled all atrocities on our planet since the beginning of time. We need to remember that divine is only love, never abandons and peace for our soul is reunification.

Enduring peace is a quality of the soul and our eternal natural state. The ability to transcend illusion and ignore misguided individuals, whom mistakenly think the only way to motivate people is to threaten abandonment, is the stuff of heroes, heroines and mystics. Everyone needs an internal gyroscope balancing our mind, body and soul. Embodying love and equanimity in the midst of illusion is the path to true peace. People frequently report something is missing, when they only focus on their personal and physical goals. Said differently, this is why wealthy people, rich in material possessions often marvel how some people, surrounded by physical and mental challenges, can remain so peaceful, loving and harmonious.

Developing a reliable soul connection and eventually tapping into spiritual oneness depends upon our training about this possibility. When we re-experience this union, peace returns and abandonment issues release. The reason people react so violently and protest today is because they feel abandoned in a systemic way. As stated previously, this primal rejection can be traced to unconscious memories of originally separation from our mother at birth and severing our divine origins as we incarnated on earth.

The most powerful driving force from the soul’s perspective is divine reunification. This is also why lovemaking is so attractive to everyone. When we merge with another in a field of love, it reminds us of our spiritual origins. There are many paths and roads to renewable peace. Consider the fact that no matter, which route one takes, it is accomplished by connecting to the green, unlimited source of peace located within our own soul and all of divinity. This is why when slave-owners, who wrote All Men Are Created Equal in the American Constitution and failed to release their slaves, did not practice what they were preaching.  When religious leaders say God is All Loving, but also say God will abandon you and send you to hell upon death, they are not promoting a God that practices what they are preaching.  Equal Justice Under the Law is engraved on the Supreme Court Building in Washington DC. A good, aspirational goal, but when people of color consistently earn less, incarcerated more and experience systemic discrimination daily compared to their white neighbors. America is not practicing what it is preaching. In order to get the soul of America back, we need to start practicing what we preach. 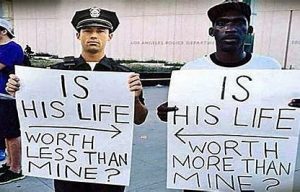