The Fire of Notre Dame and Profound Transformation

The Cathedral of Notre Dame is considered the soul of France and a shining example of French Gothic architecture with its stunning flying buttresses and spectacular beauty. The recent fire to this iconic Cathedral has given the world pause and the global sense of loss due to this tragedy is palpable. Fortunately, the fire was not caused by terrorism, which will allow everyone to reflect more deeply. Like many people around the world, I have prayed, attended mass and lit votive candles in this beautiful Cathedral like the 12 million that visit it annually.

Before Christianity existed, A Gallo-Roman temple dedicated to Jupiter originally stood where Notre Dame resides on the Seine River. Similar to the Greek god Zeus, Jupiter was the most revered Roman god who ruled the sky with thunderbolts and meted out justice. Early in the third century an early Christian basilica was built on this site until it was razed in 1160 AD to create the beautiful Cathedral we know today.

Notre Dame was birthed during the Middle Ages when knights, kings and queens ruled the land with an iron fist. The wooded timbers in its roof were felled during the Inquisition and the Crusades, when Catholics tortured heretics, Jews, Protestants and Muslims without mercy in Europe and the Middle East. Notre Dame took 182 years to build and is dedicated to the Virgin Mary. The wooded timbers supporting its roof were installed during the Inquisition that started in 1184, twenty-four years into its construction. In 1185 Heraclius of Caesara called for the third crusade against the Muslims from the still uncompleted Cathedral. Notre Dame was birthed during a tumultuous time of religious terrorism and political intolerance.

Joan of Arc was burned at the stake in 1431 by Inquisition tribunal, which took place at Notre Dame. During the Inquisition anyone could accuse anyone of being a heretic for political, financial or religious reasons without proof. One of the seventy reasons Joan of Arc was put to death was that she occasionally wore men’s clothes. She defended herself with the argument that she knew was harder to be raped in men’s clothes and this attire actually helped her successful fend off some English rogues. Sadly, she was burned alive and later canonized as a saint in 1920. In 1804 Pope Pius VI crowned Napoleon and Josephine the Emperor and Empress of France at Notre Dame. The cathedral has housed incredible beauty and witnessed religious savagery during the eight hundred years of its existence.

Victor Hugo in his 1831 novel Notre-Dame de Paris, which English readers know as The Hunchback of Notre-Dame attempted to describe the importance of the cathedral and the need to repair it after French Revolution mobs decapitated statues and rededicated the Cathedral from the Virgin Mary to the Goddess of Reason. Aware of its disrepair Victor said, “In…Romanesque architecture, one feels the priest…in the Gothic, the citizen…[Gothic churches] have something human, which they mingle incessantly with the divine symbol under which they still produce.” He thought that the printing press was the reason that no more iconic Cathedrals will be built. Craftsman originally attempted to create heaven on earth and Notre Dame’s spectacular beauty lies in the humanity’s eternal spirit, which is embedded into every stone. That passion is now put into words. This is potentially why French President Macron said after the fire, “[This is an opportunity] to become better than we are today. It’s our duty to find our national project—the one that made us, that unites us. A human project that is passionately French.”

Iconic structures like the Cathedral of Notre Dame become the object of humanity’s projections. People can focus on its positive or negative images but another reality may be ignored. Notre Dame has endured fires, mobs and wars before just like each and every one of us. Transformation can occur with little fanfare, but more often it’s traumatic. For example, the twin towers of the World Trade Center, which symbolized American economic power, were felled on 9/11. In response to this terrorist attack United States went to war in Afghanistan and Iraq, which only continued the European/Middle Eastern thousand-year crusade. Since the Notre Dame fire was deemed an accident, hopefully the deeper meaning and transformation can be grieved cleanly without the specter of terrorism tainting the process.

We live in an auspicious time of profound transformation. Like the time it takes to build a cathedral, we may need centuries to create new iconic structures that embrace social-economic differences, encourage religious tolerance and political freedom for every ethnic group. Notre Dame symbolizes spectacular beauty, architectural achievement and the triumphant human spirit despite poor stewardship over the centuries. The challenge before us all is to re-build our world without the religious intolerance and inhumanity that dominated the Middle Ages. It may take centuries to change the human tendency to be inhumane to others. If we want to embody the eternal qualities that enlightened masters have tried to teach us, we need to think of centuries in the future like the craftsmen and architects of cathedrals. Can our hearts endure and souls remain pure like the beloved Cathedral of Notre Dame, who also witnessed inquisitions, genocide and terrorism first hand. Our challenge its to love our neighbor as ourselves and create a world of love, peace and harmony.

Confucius said, “Our greatest glory is not in never falling, but in rising every time we fall.” 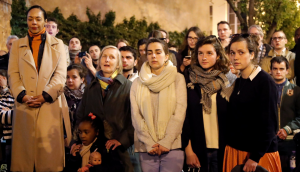 This why it is so important that Notre Dame needs to be repaired with a renewed passion.

This why it is so important that Notre Dame needs to be repaired with a renewed vision.

I join those shown here in prayer.