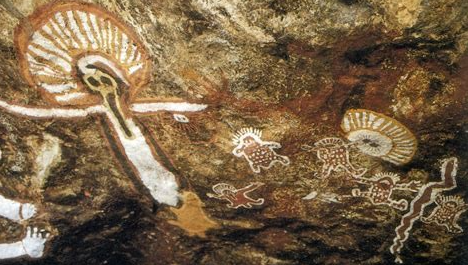 During prehistoric times, humans needed physical strength and a cohesive community, while common sense and quick instincts enhanced survival. Paleontologists report that the majority of earliest cave drawings depicted animals and schematic scenes but many had shamanic or spiritual themes. Living harmoniously with nature was a given for prehistoric man…there was no other way.

In a talk entitled “ Grief and Praise”, Martin Prechtel shared his insights about traditional native wisdom about the four thousand year old Mayan civilization and reminded me of what modern man is missing. Born on a Pueblo Indian reservation into a multicultural family with parents of native Pueblo and Swiss descendent, Martin deeply appreciated his Native American roots. When he moved to Guatemala and married a Tzutujil woman, he subsequently trained with one of the greatest Tzutujil Mayan shamans in Santiago Atitlan, Guatemala. Martin eventually became the shaman to thirty thousand people around Santiago Atitlan during the Guatemalan civil war and is currently a renowned author and lecturer on indigenous culture.

During his presentation (Grief and Praise on YouTube), Martin Prechtel compared traditional indigenous wisdom to modern society and mentioned that the native Tzutujil language used the same word for song and weep, because the Mayans considered praise and grief siblings that share the same bed. Every emotion was expressed, encouraged and supported collectively within his new community. Mental illness and many diseases were understood organically and described poetically with phrases like rage without a home. Unexpressed sorrow was considered in his culture a homeless beast. Connection, compassion and empathy were the staple of a healthy, Mayan community. If someone sat alongside the road screaming, pulling his hair out, swept up in grief, his clan would sit beside him and listen for as long as it took for the pain to subside. In Western society Martin observed, people would walk on by and think the man must be crazy while the indigenous people intuitively knew that emotions needed a home and a safe environment for expression. The word to be does not exist in the Tzutujil vocabulary because the people considered the world fluid in nature. His adopted Mayan community freely praised what was loved and grieved what was lost. Emotional expression was fluid like water: grief meant you loved, passion was an integral part of life and grief praises the love that was lost. Alcohol addiction or numbing off the grief was described as someone lost in the water. Martin Prechtel described the difference between the indigenous, modern society and I suspect prehistoric man very succinctly. Life, for these people and I suspect also for prehistoric man, was about balancing reason and emotional expression into a bonded community. In hearing this account, I suspect that this society was mastering the skills of community and incorruptible empathy.

Modern society prizes the human intellect, scientific method and relies on the Internet for information. But something precious has been lost over time, as empathy, intuition and the role of human connection became devalued. Sovereignty for ancient man came from one’s wits, strength and gut instincts, which was bolstered by loving tribe mates and a supportive society. Intellect without heart or a connection to the global community has led to separation, isolation and eventually terrorism. Equanimity within our body, mind and soul solidified by a shared incorruptible oneness within ALL of humanity—that I believe was normal to ancient man—needs to be restored in our world today.

Our reptilian and/or emotion brain anticipates trouble usually based on past experiences and the task of our higher brain is to find solutions. Illusions and delusions create shadows that reside in our mind. Our heart, the organ of love, which some people call the seat of our soul, has the power to provide the necessary objectivity to transcend illusions and delusions, which is the formula for renunciation that leads to invincibility. Passion and reason have always been at war with one another. The human mind can waffle and make any decision seem like a fifty-fifty proposition. However, our heart can access the quantum field, intuit accurate information and tip the scale to enable us to make enlightened decisions.

I imagine that prehistoric man was like the Tzutujil and did not question his or her connection to everything—each other, the winds and tides, the earth, the movements of animals or seasonal crop cycles. The way humans shared insights that expanded each tribe’s wisdom to one another seems to me more organic than oral. The book, Ethnologue: Languages of the World Though reports that our collective linguistic abilities have expanded into over 7,000 languages. That means 7,000 names for god. That is 7,000 names for suffering, joy and love. That is 7,000 languages attempting to define the enigma of oneness that our prehistoric ancestors likely took for granted. 7,000 ways to describe an appropriate mind-heart-soul connection is simply a recipe for noticing remarkable similarities but also perpetuating disparities.

Devolution and evolution are simultaneously occurring events. As humanity evolved, intellect dominated civilized society, intuition ridiculed and the important role of the human heart and soul diminished. People were expected to follow orders and orthodoxy from hierarchy in many paternalistic areas of the world, rather than explore oneness through diversity. The work it takes to establish equanimity between our mind-heart-soul connections within the community of ALL of divinity is arduous. While humanity expanded its intellect and ability to communicate, we minimized our ability to recognize our heart and interconnectedness. With that devolution came in a host of plot-lines and polarity for the humanity drama. I encourage everyone to remember your roots, follow your heart and create a home for diversity.

If not, we can get lost in the water and feelings become….homeless beasts.